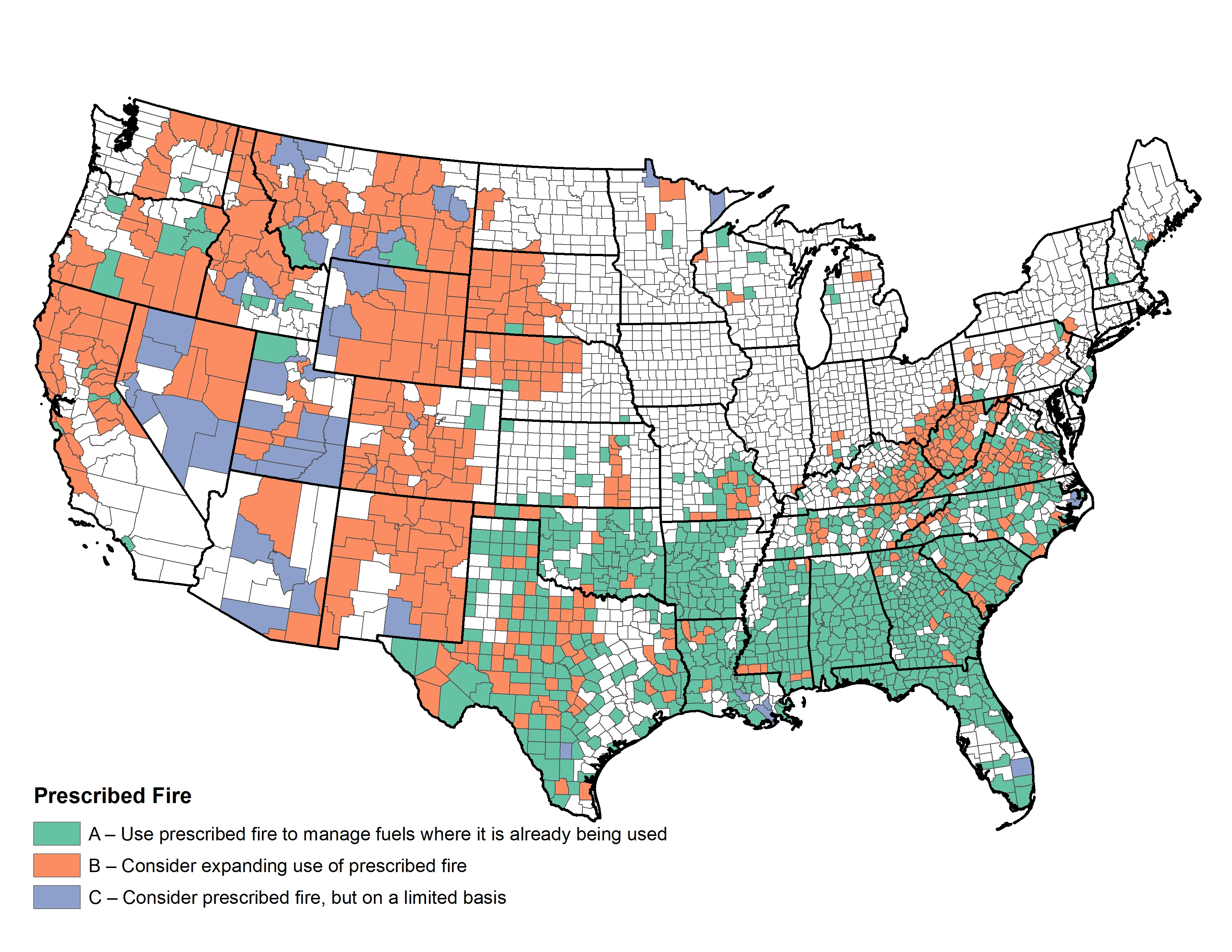 Prescribed fire carries inherent risk, as fires can escape the prescribed perimeter or produce hazardous smoke if not managed correctly. Prescribed fire also varies widely in cost because of terrain, weather, and the spatial pattern of fuels, meaning that its application is not always economically feasible. Implementing and maintaining a prescribed fire regime, therefore, requires properly trained personnel, adequate resources, and the willingness on the part of the landowners and nearby communities to accept the costs and potential disadvantages of prescribed fire in exchange for the potential benefits.

1.a: Use prescribed fire to manage fuels where it is already being used. One management opportunity for prescribed fire use is to maintain or expand its application in areas where it currently is used (Option 1.a, figure 3.3). Fire management specialists in these areas have the necessary training and experience to implement a prescribed fire program and the history of use suggests community acceptance and tolerance. The analysis of probable areas of prescribed fire use based on remotely sensed data and other reports indicate that many counties throughout the Southeast and scattered counties in the Northeast and West are substantively using prescribed fire. This option would build on that experience and expand its use where economically feasible and socially acceptable.

Data explanation: There is no history of fire in these counties, but has high potential for fire in the future [Sum of Fire and Non-Fire Rx potential >60% and Prescribed Fire <1].

1.b: Consider expanding use of prescribed fire. A second opportunity is to expand into areas with prescribed fire potential, yet evidence of current, widespread application is lacking (Option 1.b, figure 3.3). These include many areas in the West as well as counties in the central Appalachians. Implementing prescribed fire regimes in these regions likely will require additional training and resources, as well as outreach and coordination with the communities that are most likely to be affected. Environmental constraints, especially in rangeland systems with invasive species (e.g., cheatgrass) or critical wildlife habitat, will have to be considered and addressed appropriately, as will the economic costs of introducing prescribed fire in more challenging areas.

Data explanation: There are moderate amount of roads in these counties with moderate potential for fire in the future [Not 1A or 1B and Roaded <40% and the Sum of Fire and Non-Fire Rx potential >25%]